World Hemophilia Day is a day that I use as leverage to have friends give me hugs. Or buy me a drink. Pretty much whatever I can squeeze out of my rare bleeding disorder, I go for it. I’ve got just one shot a year to make it happen. You might be thinking, “Well, what about World AIDS Day? I’ve seen you ask for outrageous things in the past on World AIDS Day.”

The competition is way stiffer on World AIDS Day. There are more people on planet Earth who have HIV/AIDS than hemophilia.

All jokes aside, my World Hemophilia Day started off quite mundane today. The things that centered around my bleeding disorder weren’t about my trivial needs nor my attempts to playfully play the role of victim for my friends who, thankfully, enjoy my antics. No, today I spoke to one of the nurses at the hematology clinic here in town, as well as a liaison at the hospital that deals with the tricky issues of insurance and coverage. See, hemophilia can be an expensive condition to live with. Fortunately, my coverage has always held up pretty well.

Also, fortunately, I have mild-to-moderate hemophilia. So bleeding episodes that require the use of clotting factor are few and far between. Which means, occasionally, I have expired factor in my fridge. It’s still effective, just like many of the other items in the fridge that have lived beyond their expiration dates. Maybe I have a soft spot for things that survive past their expiration dates?

Anyway, in addition to those two conversations, I also spoke with the pharmacy tasked with mailing my hemophilia medication.

Just last week I received a somewhat insulting letter in the mail from my insurance company, which basically asked me if having clotting factor was really something I needed. Like a parent trying to reason with a toddler who is campaigning for a lolipop that is bigger than their torso. The insurance company also claimed they had no proof that I had hemophilia. I thought about taking it to the insurance company by taking to Twitter to post news articles and pictures of me as a toddler covered in bruises… but I was too lazy to dig all of that shit up.

Anyhoo, after limping into World Hemophilia Day on the wrong bad ankle, things seemed to settle in. I got word that my factor order should be going through soon. I texted some friends my demands on this special day. And I just had incredible sex with my lovely partner. Right now I’m sitting in my dining room in a vintage bathrobe sipping on Scotch and bashing out this pretty amazing blog entry. 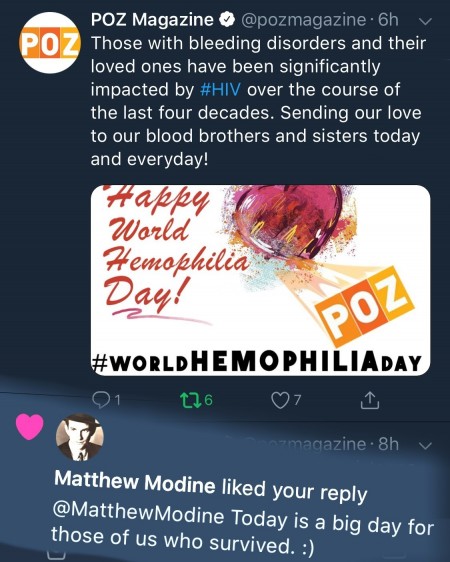 I still got it. And hemophilia. And HIV.

Oh, in addition to the strong finish, I had a midday high point on Twitter when Matthew Modine, who portray Dr. Don Francis in And The Band Played On, liked my mentioning him on POZ’s Happy World Hemophilia Day. That was pretty cool.

So, all in all, it was a pretty glorious World Hemophilia Day. But one that was wrapped up in a lot more reality than fantasy and whimsy this go around.