The hemophilia community suffered a great loss this month when Barry Haarde passed to spirit. I invited his blood brother (that’s what us hemophiliacs call each other) and fellow cyclist Vaughn Ripley to write a tribute… and what a tribute it is.

One little note on the picture at the bottom. I took the selfie with a group of blood brothers at a hemophilia conference in 2016. Vaughn ordered a round of shots- everyone drank theirs and Barry was kind of nursing his. Then he lectured us all in good spirit about having various levels of liver damage before taking the shot… well, Barry, you got the first shot in on us this time- a shot to the soul. Ride on, Barry, and thanks for the laughs, warmth, generosity and kindness. – S

A Tribute to Barry

Hemophilia is a rare bleeding disorder that is a deficiency based around a missing (specific) coagulating protein factor. Suffice it to say that an untreated hemophiliac continues to bleed after an injury without any way to stop it. Modern medicine and science have allowed hemophiliacs to survive beyond young adulthood. Factor VIII (pronounced factor eight) is the product that “Type A” hemophiliacs use to prevent and control bleeding episodes.

There are many in the hemophilia community (past and present) who are raising awareness and shedding light on our rare disease. Some are doing epic adventures in the pursuit of advocacy and literally inspiring everyone they meet with their deeds and actions. All of us have a hidden common thread…We look up to Barry Haarde. Not only does he inspire in the bleeding disorder community, but he also inspires in the HIV/AIDS community as well. On top of that, he inspires everyday normal (unaffected) people. Barry is an inspiration of epic proportions!

This tribute is about one of the most amazing people of all time. Barry Haarde. The irony is that many of the other inspirational hemophiliacs owe their start to Barry. His last decade on Earth was dedicated to a mission of not only spreading awareness, but also empowering others to do the same. And he was good at it.

But before we get there, let’s leap back in time to November 14, 1965. The day that Barry Haarde, a hero, was born. He was born in time before medicine was available to help hemophiliacs stop bleeding. Barry spent much of his childhood reading and playing his trombone while he was laid up healing bleeds. He didn’t really play any sports and he was a self-proclaimed introvert with few friends. This story rings true for many of us older hemophiliacs. In 1985 Barry was diagnosed with HIV (called HTLV-III back then) at the age of nineteen. He had been infected by tainted blood products that he was taking to control his bleeding. Like many of us from that dark time, he kept his HIV status a secret.

Unfortunately, there were many stories of extreme discrimination, death threats, and even houses that were burned down to scare people out of cities and towns. This stigma was too much for many of us… I personally experienced much of this and can empathize with his emotions and struggles.

Along with the HIV, Barry had also contracted Hepatitis C; which many of us did back in that day-and- age. We call it the three H’s – Hemophilia, HIV, and Hepatitis C. Kind of like winning the anti-lottery if you will. Moving on with his life, Barry used his exceptional trombonist skills and built a career as a professional musician. He even went on some national tours with a few Broadway shows and the Tommy Dorsey Orchestra. Along the way, Barry had the opportunity to perform with Bob Hope, Perry Como, Rosemary Clooney, and many others. Eventually that career ended because the health insurance was minimal and his Factor VIII costs alone were astronomical.

During the eighties, more than 90% of hemophiliacs contracted HIV and Hepatitis C from the “bad blood.” During the nineties, around 90% of those afflicted died from one or more of the many issues that came from these bloodborne pathogens. In 1990, Barry’s brother in-law, Pat, died of AIDS related complications. Then in 2007, Barry’s brother, John, died of liver cirrhosis associated with Hepatitis C.

I first met Barry Haarde back in December of 2010. It was an odd meeting…Barry called my home phone around midnight on a Tuesday evening. He explained that he’d just found my book, Survivor, online and was wondering why he had never heard of me. After my initial shock, I told him that my book was brand new and I had been hiding my HIV and hemophilia status for more than two decades. We spoke for a few hours that night and discussed our many eerie similarities. By the end of our conversation, Barry was lecturing me about needing to be out there, sharing my story and raising awareness. Dumbfounded, I vowed to get involved and said, “good night.” I didn’t sleep a wink that night. But I did promise myself that I would get back involved with the community that I thought had died away.

I’ve never looked back since then. Thank you, Barry!

Shortly after meeting Barry, we rode together in four Hemophilia Federation of America’s Gears for Good C&O canal rides… well, I missed part of one due to an injury and bleed – But I was there cheering him on when I wasn’t physically pedaling. Barry inspired me to join him on those rides, which raise money and awareness for people living with hemophilia. I wasn’t the only one that Barry motivated and inspired…He often inspired folks, and I’m certain that he has been an influential driver in hundreds if not thousands of people pushing themselves further in life.

In 2012, Barry took his inspiration to a new level when he decided to ride his bicycle across America and raise money for Save One Life. As if that wasn’t an amazing enough adventure, Barry continued doing epic long rides each year after that first one. In the course of his “Wheels for the World with Barry Haarde” adventure, Barry rode more than 20,000 miles and raised more than a quarter of a million dollars! He did all of this on a replaced knee, dealing with severe type A hemophilia, pedaling through the pain of peripheral neuropathy in his feet, and living with HIV!!! We haven’t even talked about the fact that he was fifty years old! Most fifty year olds complain about getting up from the couch to walk to the refrigerator!

Even more impressive (and staggering) is that Barry logged almost 100,000 miles in the saddle, while training and doing events since he started riding his bicycle to raise awareness just over eleven years ago!!! It was only three decades ago when cars were considered to reach their end-of- life after 100,000 miles! On top of that, as I’ve said, Barry lived with severe hemophilia and HIV. Did I mention that Barry had a knee replacement and lived with painful peripheral neuropathy??? He was literally the poster child of someone who couldn’t accomplish one-tenth of what he did accomplish. Barry not only stood up to the odds, but he pummeled them and pushed himself to unheard of levels. He did all of this selflessly to help inspire others and set an enormous example of what is possible despite life’s obstacles.

Along with the incredible bike rides, Barry also traveled the nation giving inspirational speeches. He showed up at almost every national hemophilia event and spread his word of hope to everyone that he met.

Barry was not only one of my best friends. He was my mentor and my hero. He literally pulled me back into the hemophilia community and got me involved with the HIV/AIDS community. I looked up to him like a big brother and he welcomed me with open arms. Barry encouraged me at every chance he got. We routinely teased each other like the brothers we were. And our time together will always be ingrained in my mind. He used to call me Vaughn Wimpley and I called him Barry Hardly. We fueled each other’s fire and passions with creative and loving jabs. One time at one of my speeches, just before I went up on stage, Barry leaned in and whispered to me, “When you least expect it, I’m gonna heckle you.” I laughed and he looked back seriously without a smile. Chuckling nervously, I stepped on to the stage. I had to look over my shoulder…hehe

At every chance we created a spectacle that other folks could laugh at, learn from, and hopefully be inspired by. Don’t get me started on the “Great Cape Caper…” Good God we had fun poking each other! When I read that Barry had passed, I texted him and asked for him to tell me it wasn’t true. I mean heck, I think folks created a dozen rumors of my dying in the past… so, I figured maybe this was someone’s sick joke. Once I got it confirmed I was still in disbelief. I was devastated. It has taken me nearly a week before I could even write this article that I knew must be written.

To paraphrase Neil Young, “This is the story of Barry Haarde. It’s better to burn out than it is to rust. The King is gone but he’s not forgotten. Hey hey, my my…Barry Haarde can never die!” Barry might be gone, but he will never be forgotten. Look for the Barry Haarde Memorial Bicycle Ride; which me and a few close easy bleeding friends are coordinating and participating in to ensure that his memory and inspiration will continue to carry on!

It is my hope that this tribute not only shines a light on a magical being, but also helps to inspire you. 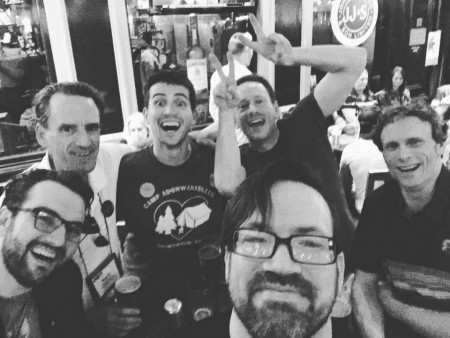